Special price for the E-trailer

Enjoy our special discount of 100€ on the electric bike trailer equipped with a 1000w motor.
The Xtrême kit is a very strong motor, specially designed to carry load.
It is able to push the trailer with a load of 45kg, the bike and the user. 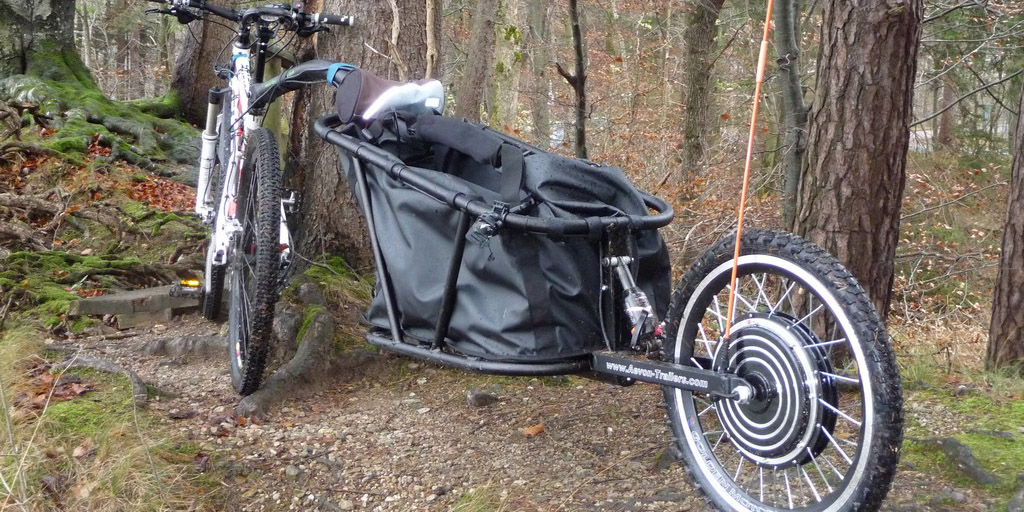 You just need to choose a 36 or 48v battery, depending on the intensity of your use and the speed you would like.
In terms of autonomy, you can reach up to 100km and even more, depending on the capacity of the battery.

If you are a bike traveller, the trailer can increase the distance of your trips and get you even further.
Daily, the electric trailer can replace your car to carry your purchases. For professionals, it becomes easy to move from one place to the next with material or to make deliveries.

The Aevon bike trailer is able to carry up to 45kg on roads and up to 35kg on MTB tracks. Its aluminium frame is designed for an intensive use and the hitch system on the seat post enables your trailer to follow you on any type of track.

Honeymoon with an STD 100 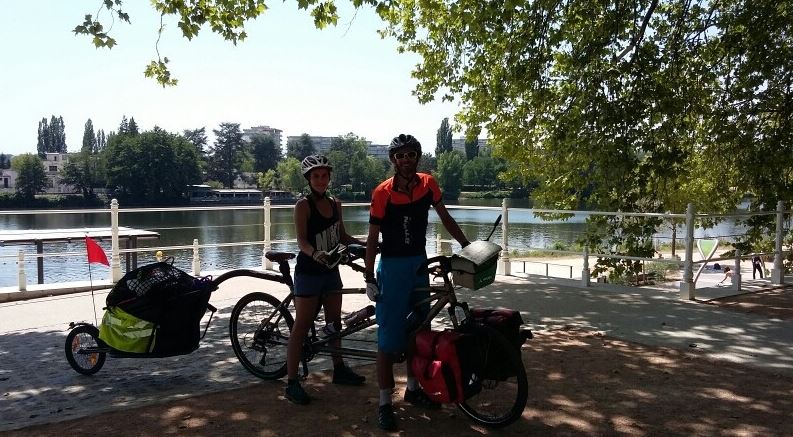 Vincent and Sarah, two doctors, decided to go to Istanbul by bike and trailer for their honeymoon (July 2015).
To fulfill their project of a journey by bike, Vincent and Sarah bought a trailer AEVON STD 100 to help them carry all their stuff.
This bike trailer’s bag is waterproof, which is essential for a bike trip.

Here are some extracts from Sarah’s logbook :

“Day 7 : from Saint-Jean de Losne to Besançon : 105 km. We went through the Doubs’ valley and reached Switzerland’s border faster than expected.
Day 12 : from Lörrach to Stühlingen : 105 km. We didn’t really intended to cycle for so many kilometers, but there is only a camping every 50km and we didn’t want to sleep under the stars so we had to cycle.
Day 19 : from Ingoldstadt to Bad Abbach : 70 km. The sun is back and the road is more and more beautiful !
Day 25 : from Schönbühel to Klosterneuburg, 10 km before Vienna : 98 km. This is it ! We reached our first goal : join a capital ! After facing the wind which slowed us, we arrived exhausted in the capital of Austria.
Day 30 : from Komaron to Budapest : 126 km. We broke the record !! !We speeded up because we wanted to arrive fast at this third capital, final destination of many bike travellers we met. […] Day 36 : from Kopacevo to Ilok: 85 km. Second and last day in Croatia, and we already regret leaving this welcoming country. All the people we met are extremely kind…

Day 37 : from Ilok to Surduk : 97 km. It’s the beginning of problems. Probably because of the rain… 3 bike falls, 1 broken rack, only 7 km in 2 hours, and all of this under the rain and thunder. Fortunately for us, anything can switch off our good mood, and we create a motto : « sing and keep smiling even if you meet difficulties »
Day 43 : from Brza to Simeonovo : 106 km. We broke the speed record with 62km/h, we travelled for more than 3000 km (3024 km exactly).

You can find all info about Sarah and Vincent’ trip by bike on : http://sarahvincent.jimdo.com/journal-de-bord/ 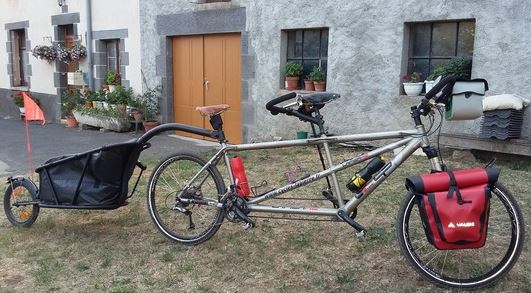 Cyclable is a network of 25x shops, all located in city centres across France.
Specialized in city bikes and travels by bikes, they choose only quality and innovative products with very little maintenance.
5000x users choose their bike at Cyclable every year.

Now these users will be able to choose their Aevon trailers as well, the only trailers made in aluminium with a very easy to handle system of hitch on the seat post.
Making a U-turn, taking a ride on mountain tracks is only possible if you choose the Aevon brand. 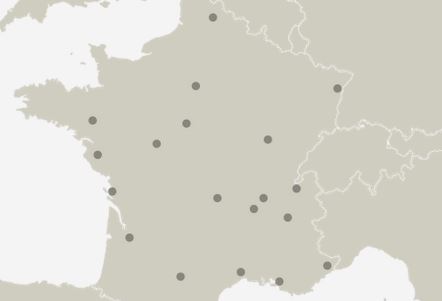 For their special edition, the magazine Carnets d’Aventure, specialized in non-motorized trips, has tested 10x bike trailers from different brands.

The KIT L80 gets the best rating thanks to its excellent behaviour in cross country use, its strength, its weight and the hitch on the seat post.
The only failing could be that it’s not the easiest to set up.

The KIT L80 is the only bike trailer, worldwide, which is made in aluminium and can be folded. You can easily bring it with you in your trips around the world.

Now it also exists as an electric trailer 250w ! 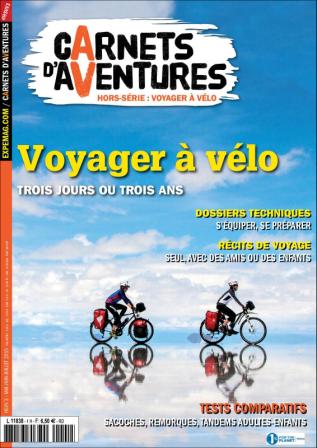 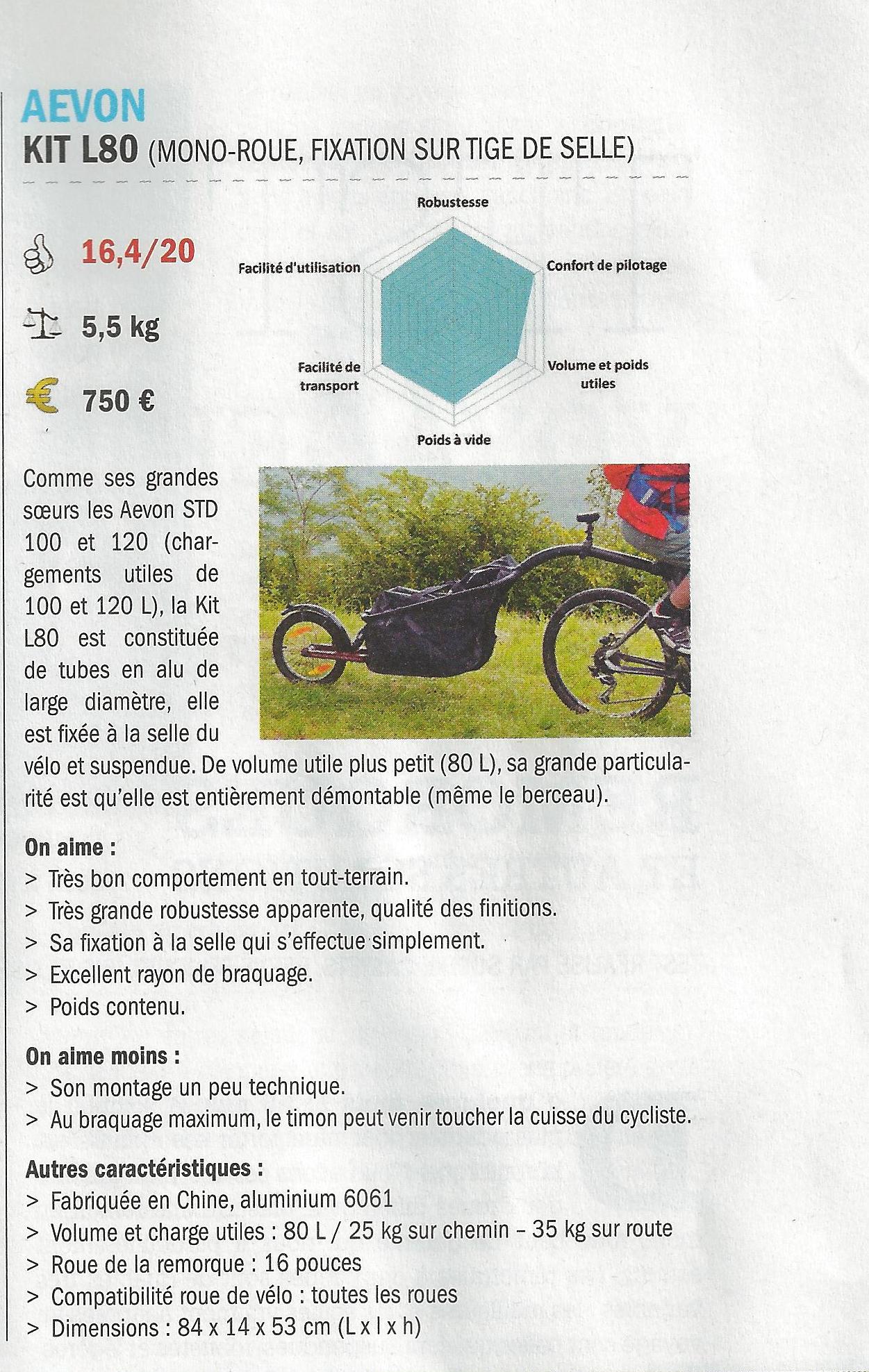 Test the KIT L80 during the Roc d’Azur

The KIT L80 is the only bike trailer that can casino spiele follow you around the world and be folded within 4 minutes !
Available again around April 2015, you can test and try it at the Roc d’Azur in Frejus this week (October 8th -12th 2014).

Very light (5.5kg), very handy, you can load up to 35kg of luggage without feeling a thing.

Thanks to its alloy frame, it will follow you in your most challenging cross crountry outings as well as your trips around the world.

Our team will be happy to meet you at the booth D18. 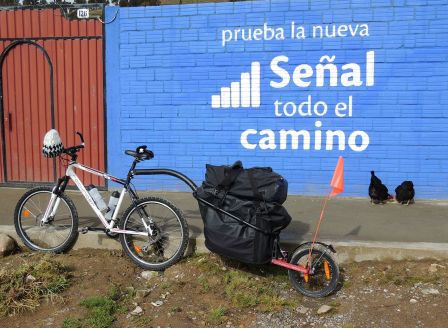 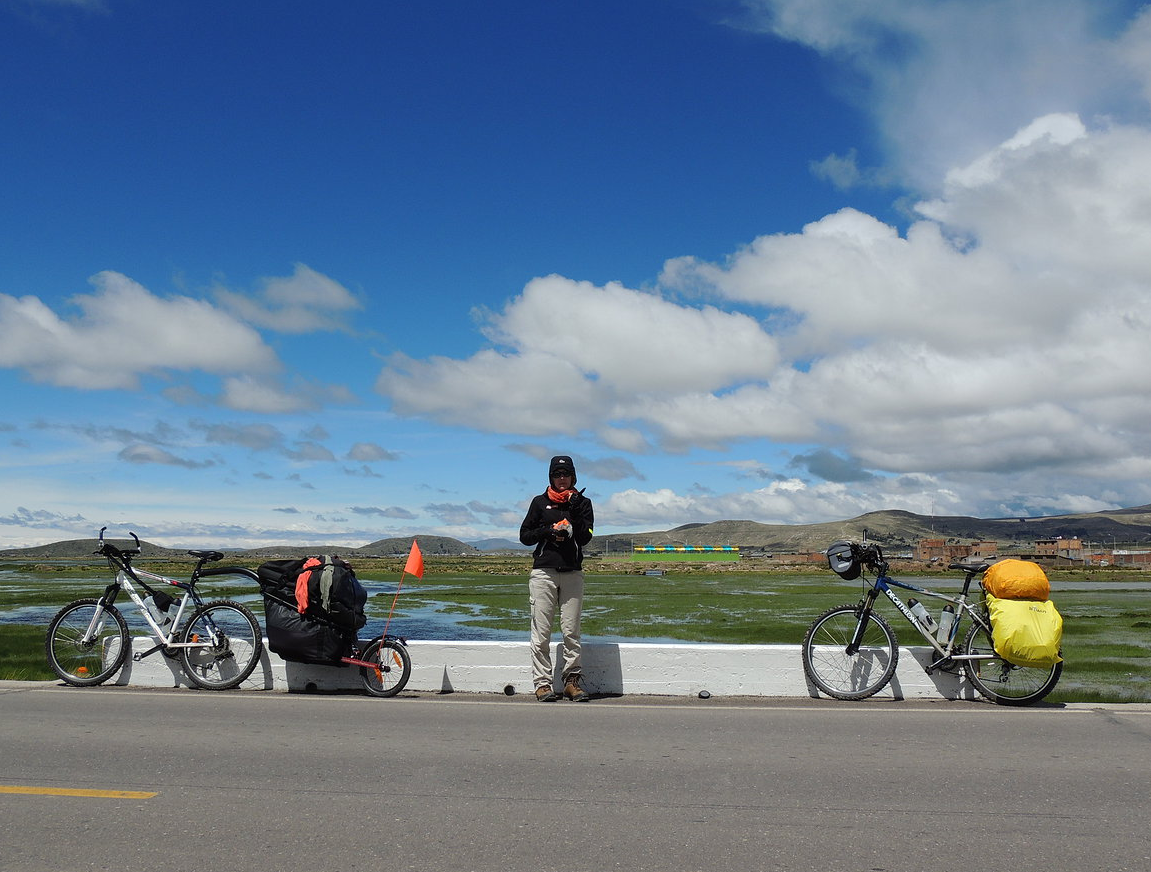 Your new Aevon dealer, La Maison de la Bicyclette is located in Angers and specializes in city bikes, tandems, delivery tricycles and many others. 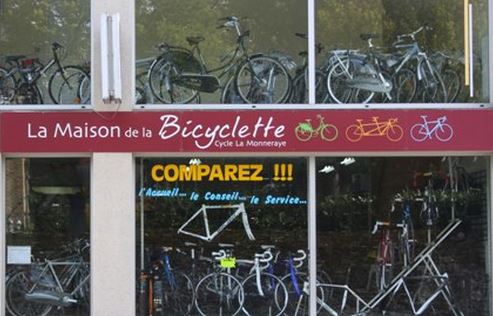 They will be delighted to give you some advice and tell you which material is the most suited for your needs, whether you intend to cycle everyday or to travel on your bike for miles.

Buy your Aevon trailer directly from their shop

The E-Trailer exposed in Paris

Aevon was at the exhibition “Destinations Nature” in Paris, from March 27th to 30th 2014.

During this show, we presented the electric trailer 250w. 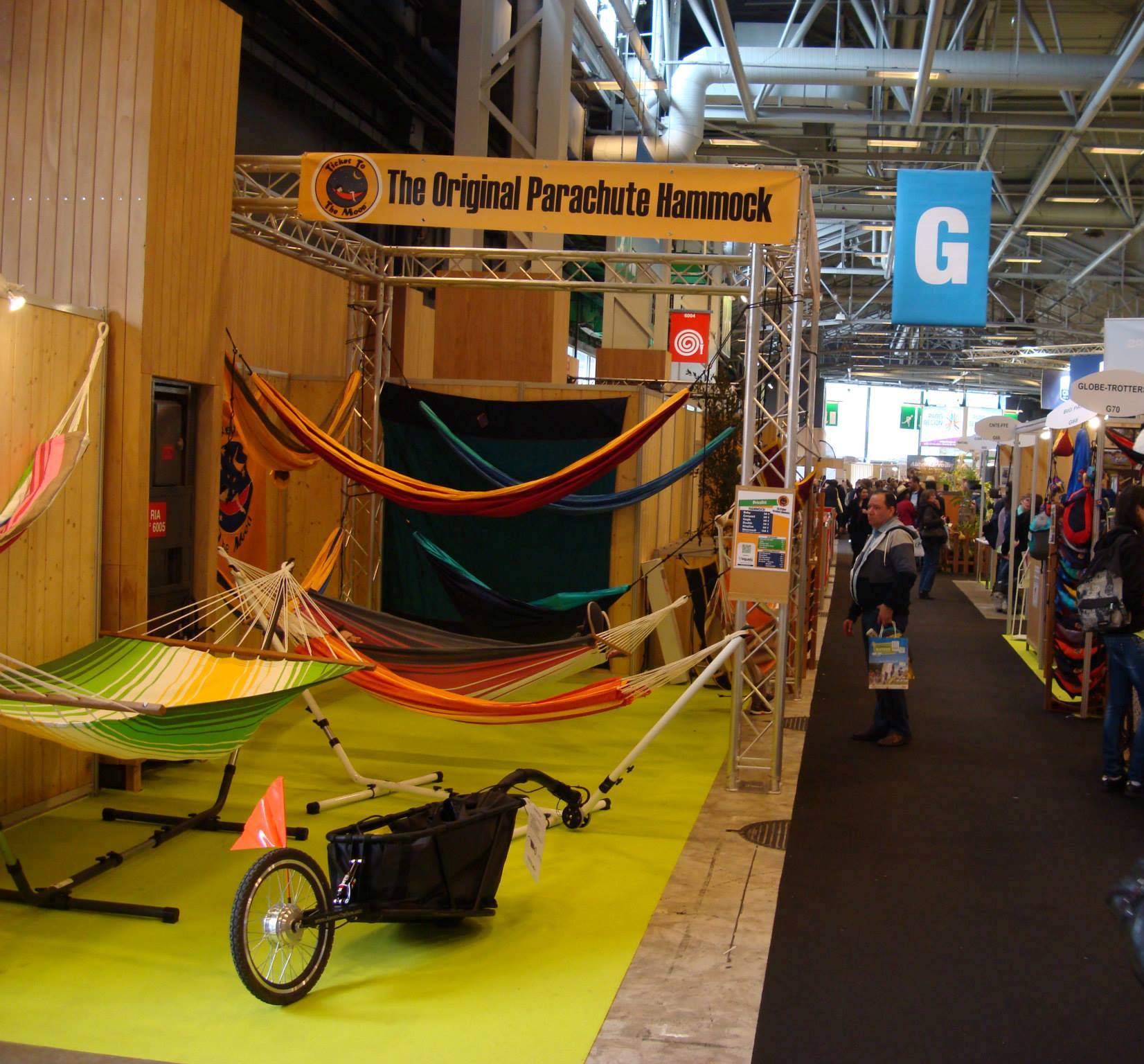 The use is easy as pie. With a throttle set on the handlebar, give a little push when you need it, uphill or on difficult tracks.
Carry up to 45kg of luggage, for a self-sufficient adventure !

Till and Claudine have travelled by bike for more than 8000km and 8 months in all.

They chose the Uno 100 trailer for its reliability and its easy handling. “The hitch under the seat of the bike enables us to make a U-turn easily, a main asset on all Aevon trailers !”

Their travels led them to South-East Asia and to West Canada and deeply changed them.

“From our travels, Claudine (my wife) and I would have so many things to say, so I will use the words of someone else to say that “travelling is a way of discovering yourself through the others“. The bike triggers sympathy, and it is even more true with a bike trailer (especially in Asia…)”

Claudine and Till are now planning their next trip in the USA, from Seattle to San Francisco, with their UNO 100.

A few pictures in Canada : 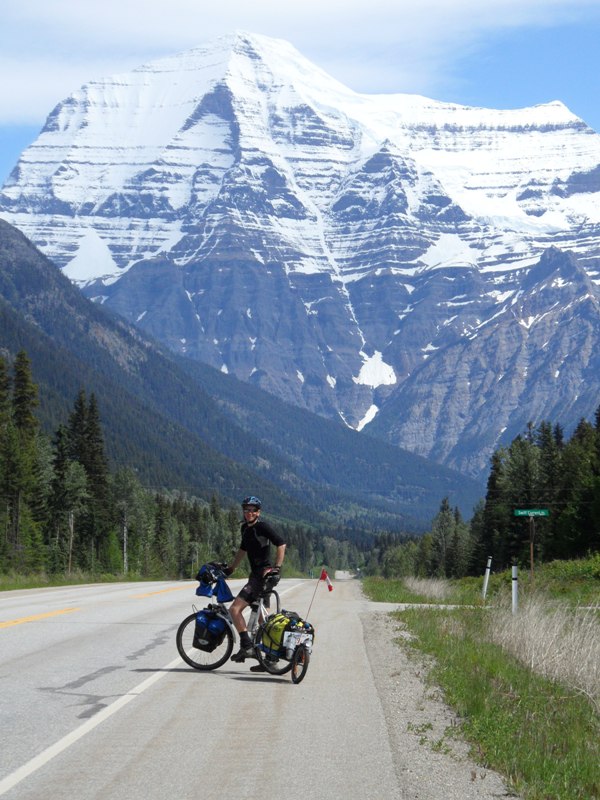 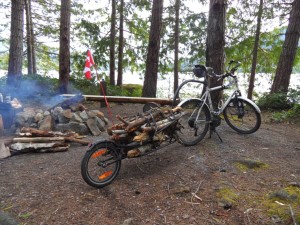 A few pictures in Laos : 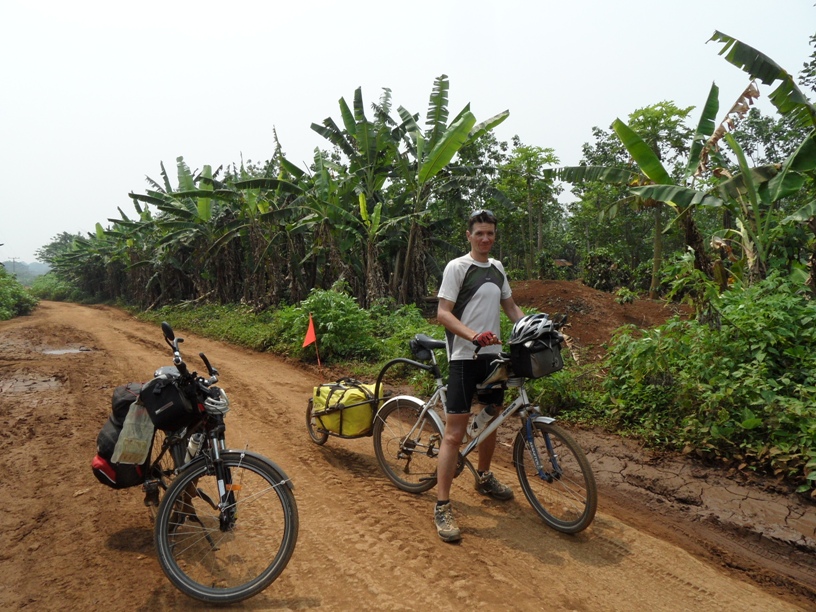 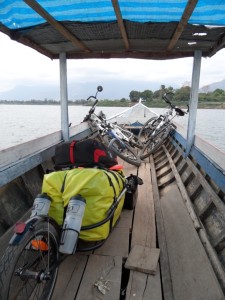 Baïcchus Tour – the wine making adventure with an Aevon trailer

Mickael has been travelling by bike and Aevon trailer for 7 months now. He continues to write about his adventures on his blog.

“To pick up where I left off: after a long wait for the sun on the Mont-Blanc and the opening of Col Petit St Bernard, I came back to Savoie by passing the Col of Saisies in  early June. A freezing and rainy day, I avoided to put the lens of my camera outside. Yet it is the longest part so far, more than 115 km. Not far from Albertville, I put my bike and my Aevon trailer aside for few days, so I was able to achieve some beautiful climbs on skis.”

“I hit the road on June 20th, in the direction of Bourg Saint Maurice. To avoid heavy traffic in the Tarentaise region, I cross the Beaufortain massif by the Cormet of Roselend, its dam and its pastures. Clouds and raindrops threaten my arrival in Beaufort. There is a certain freshness during the long rise of thirty kilometers and 1600 difference in altitude. The sun makes ​​a few appearances for photos at the dam. But a strong and cool wind quickly rises to the pass, 8 km away. Time to enjoy the col, to chat with a few passersbies intrigued by my bike trailer and I continue my way to the valley Glacier Chapieux and Bourg Saint Maurice.”
“The Col du Petit St Bernard, 2188m. Very ancient route way in Italy and Rhone. A long climb to the stunning scenery and glorious sunshine. Snow is waiting for you at the col, dozens of meters of snow drifts are announced. A legend to attract tourists. As always, the long, slow climb up the col then gives way to an exhilarating descent between 50 and 60 km/h … the STD 100 trailer is on top!” 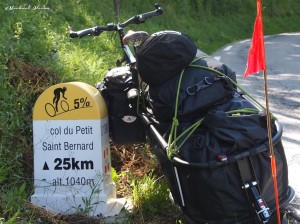 September: after a long and grueling journey by boat and train (from Dubrovnik, Croatia to Bari, Italy) Michael arrived in Italy for a month of grape harvest.

“It is already night when I finally arrive, exhausted. I find a place to spend the nigth. A Sunday of rest, not too early. In the evening I arrive at the wine-growing estate, Stéfania Pepe greets me with a big smile, I feel immediately at ease. A beautiful view. The Sea in the East, the mountains in the West, hills of olive groves and vineyards in between. Ma che bello!

Almost a month has gone by. Time to pick some grapes, make a lot of “washing up” in the cellar and start off with a little Italian and then I have to hit the road by bike and trailer. I leave with a little apprehension, because I know with certainty that it will be more complicated due to fall and winter climate. “ 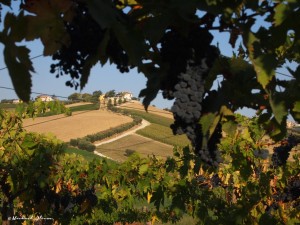