After Panama City, Bertrand immediately found a boat for him, his bike and his Aevon STD 100 trailer.

His goal was to stay for a few days in Panama City to organise his passage to Colombia by boat.

An agency offered him a trip of 5 days with a detour by the San Blas islands for 550$, a little too expensive. Finally, Santiago, a Colombian offers a departure the next day in the afternoon. Bertrand has to leave early to get to Puerto Lindo

At the toll booths, the guy doesn’t even lift his eye from his phone. A few kilometers after that, I cycle past a police station on the side of the road. No reaction.

A few kilometers later, a pick up overtakes me and an officer asks me to stop… The next exit is 25km away but he asks me to get out of the highway immediately. I really need to get to the next exit. He tells me to put my bike and my STD 100 trailer in the pick up. I enjoy 25km in an air-conditionned pick up before getting back on the road under a rain that won’t leave me until I reach my destination…’

Bertrand passes by the sole WIFI post of the village, no message from Santiago, no news.
The end of day slowly arrives, he decides to go to the marina to explain his situation. The captain of the sailing boat ‘La Sangria’ accepts to take him on board.

‘I will work on the sailing boat until we reach Cartagena. The boat leaves early in the morning after a night of heavy rains, winds and thunderstorms that were raging a few days ago above the islands of Saint Martin, Saint Barth & Barbuda…’ 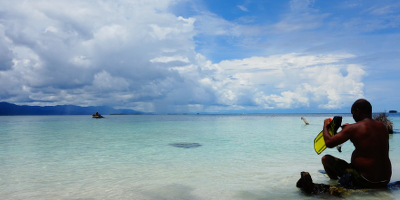 Bertrand spends 3 days sailing between the San Blas islands with a few stops along the way to admire the landscape. On his way, he see Santiago’s boat a little farther up…
At Cartagena, it’s the day of the pope’s visit. The captain offers Bertrand to sleep on the boat as long as he needs as he’s not planning to leave until October 18th. 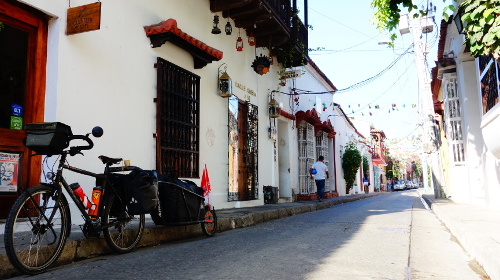